This was posted on Ron’s blog about a week ago, reprinted with permission here. 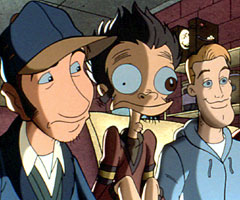 So after nearly a year of battling the subject, it would seem the issue (thus far) is at a stand still. The issue being; the Nova Scotia Labour tax credit debacle, in which a slight re-interpretation of a certain legislation a year ago has caused major ramifications in a certain film & television sub-sector of our province. That sector being the entire animation industry for our region. It’s been no surprise, and no joke, as to how the economic hardships of the past 2.5 years has hit the film and television industry very hard out here on the east coast and most of Canada.

The studio I had helped to nurture and manage had fallen victim to the changing times two years ago, as did many other animation production companies across the country. A perfect storm had formed at the beginning of 2008, a combination of the American Writers’ Strike, Canadian broadcasters & executives going back on their promises and opting for

cheaper labour in Asia, and several other factors culminated to this long disastrous event that caused dozens of projects to dissolve away and millions of dollars in projects disappearing or relocating overseas. We all assumed this would just be a ‘down period’ like the other couple times this had happened over the last 15 years, but that isn’t the case anymore. Now this government oversight could very well be the final death blow of the animation industry for Nova Scotia. This isn’t new to many who had been working on their last projects out here in ’08 and ’09 before changing careers or moving away, and I suppose I’m just writing this to everyone left in N.S. that DO want a more stable future for the animation industry out here.

Juan, Murray, and Paul from Copernicus amongst a few others, have waged this war for quite some time, to simply bring awareness to the subject and to promote a re-evaluation of the situation by those in power. They’ve conducted research to unearth facts about the tax credit system and how in fact the government (and certainly not the Nova Scotia animation industry) do not benefit from this reinterpretation of these rules.

Helix Digital, Cartoon Conrad, and Huminah Huminah have either had to downsize, hibernate, or have begun to explore and expand into new media ventures, online games, and other similar productions. The alternative, is to dig deeper and find ways to fund productions in ways that have nothing to do with the Canadian Media Fund or the Nova Scotia Film Industry Tax Credit. This is nothing new with any animation-related company – forced to go past their expertize and perhaps learn new skills and technologies in order to adapt to changing demands and economies.

However, when you have Halifax Film, the larger and more 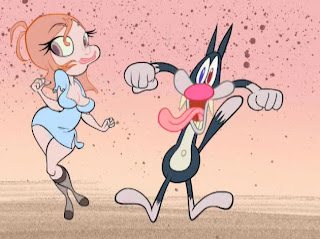 corporate infrastructure (specializing in 3D television animated series), potentially forced to relocate to their Ontatio-based offices, then we know the industry here is in trouble. Funding for animated series cannot possibly be made in this province under the current regime. At least not in the traditional sense through Government funding.

Adapting to the times is one thing. But in this day and age, when digital animation can literally be made anywhere in the world, where (thanks to the technology with simple FTP and video conferencing) where ever the talent is, the productions can be done, one can’t help but think as to “why” our government can be so ignorant.

I settled down here years ago. Me and a few other studio heads, helped to build the animation community out here. After these past 12 years of highs and lows and what had started off as just a 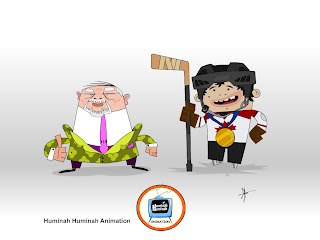 dozen animation artists and producers – had blossomed to a force of over 800 at its best. I’m not saying there’s an easy solution, but to have the Nova Scotia Government’s Financial Department strike the final blow is a cruel irony that I certainly hope doesn’t spell the end of our all-ready-suffering industry.

We had made Nova Scotia our home.  The talent was trained or imported here, and we had fostered some amazing projects and people as a result. The talent pool has depleted to a fraction of what it was. With only short term contracts, small projects, minor game design gigs, shrinking budgets, and development work scarcely feeding the small 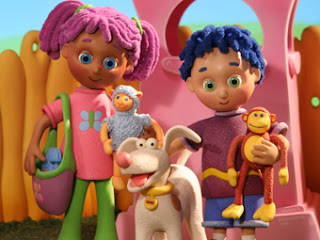 remaining studios left in the province, these companies must adapt, change and survive this storm that only seems to worsen with each passing month. The alternative, to give up. Animators survive, learn and adapt all the time, studios must do the same. It’s just a shame that it is under these conditions, where we are forced to unnecessarily look elsewhere, when the funds are here, just like the Quebec, BC, and Ontario tax credit systems.

Why is this on a blog post here?
Simple… to inform those who may not have realized the gravity of the situation. At the very bottom there’s an e-mail you can write to, to voice your opinion, to shout out to the media and to explain why the tax credit system must change back to the rate that was… at least to a competitive rate, for the animation industry to survive here, like the other provinces.

For those of you unfamiliar about the details of this whole shit storm, Mark Cappello, a 15-year veteran of the industry, summarized it best with this:

Before the government adjusted their interpretation Nova Scotia was in line with Ontario (higher than Toronto, similar to Ottawa) and in line with BC. This put all 3 major film and TV producing provinces on roughly the same level. Producer’s (the ones who get the incentive) could choose based upon their personal relations, studio reputations, geographic convenience, etc. etc. and companies in Nova Scotia were essentially able to offer similar budgets (possibly lower with a lower overhead cost) and comparable levels of crew talent.

This new interpretation has had the effect of almost halving our tax credit when compared to those other regions, leaving NS a very poor option for a producer to help fund their production. A producer gets essentially 50cents back in labour for every dollar spent in parts of Ontario, to about 28cents for every dollar now in Nova Scotia.

For example, if you have a large production that will put about 3 million dollars in LABOUR through a region, you would lose $660,000 going through NS instead of Ontario. What producer would make that choice?

We’re seeing the answer to that right question now, NONE.

This isn’t about being 5% higher than the ‘have’ provinces (though that would be nice), we could be 5% less even, which is what we would be if they just went back to the interpretation from 2008 (all other regions increased their tax credit slightly while NS dropped theirs). If we’re in the ballpark then we have a chance of doing business.

We are basically not even in the same business right now, no producer could consider spending in this region with the incentives so high in other regions. If the government of Nova Scotia does not want to invest in an industry that brings in $4 of revenue for every dollar government spends (why do you think other regions are increasing their incentives?), then just get out of the game altogether. Tell us now that Nova Scotia is not in the ‘cartoon business’ and we can move our families and businesses to greener western pastures.

If Nova Scotia wants to keep this industry, it needs to act NOW to keep what little is left, and set the tax credit at a rate that is at least competitive to the other provinces that offer the incentive.

Two weeks ago, our local paper, the Chronicle Herald, posted this article:

Changes to Nova Scotia’s film tax credits are drawing the ire of the province’s animation sector.
“The tax credit model doesn’t work for us,” Paul Rigg, president of Copernicus Studios Inc. of Halifax, said Wednesday in an interview.
The government offers tax credits of 50 per cent or more to qualifying projects produced or shot in Nova Scotia by companies that have a permanent provincial presence, according to Film Nova Scotia. It administers the program. 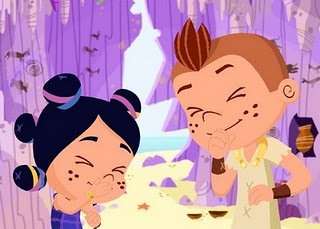 In metro Halifax, the credit is calculated as either 50 per cent of eligible Nova Scotia labour or 25 per cent of the total production costs for productions, whichever is less.
Outside Halifax, the credit is calculated as either 60 per cent of eligible Nova Scotia labour or 30 per cent of total provincial production costs, whichever is less.
Rigg is a member of a new organization, Digital Animators of Nova Scotia, which opposes a tax credit interpretation the provincial Finance Department announced without consultation last summer.
That interpretation caps the credit at 25 per cent of the Nova Scotia portion of a production budget rather than the previous cap of 25 per cent of the total production budget for all jurisdictions.
The association said the previous cap had been in effect for the last 10 years.
The animators group said the change effectively lowers the cap because most animation productions are done in partnership with production companies outside the province.
“This policy reinterpretation has had the net effect of almost halving the value of the tax credit for animation productions based in Nova Scotia and making the Nova Scotia industry uncompetitive nationally,” the group said.
The organization said the animation industry has suffered severe job losses — dropping from 800 to 75 sector workers — since the change was implemented.
It wants the government to eliminate the production cap or move to a labour-based tax credit.
Rigg, whose studio has done animation for the BBC program Garth and Bev and for George of the Jungle, said 95 per cent of animation projects are co-productions with companies in other jurisdictions.
He said the narrow interpretation of the tax credit limiting it to a percentage of work done in Nova Scotia puts the local industry at a disadvantage, compared with its competition in Ontario, Quebec and British Columbia.
“This is killing us.”
Film Nova Scotia president Ann MacKenzie and Finance Department officials could not be reached for comment Wednesday.
The Chronicle Herald ran a second article, including comments from government officials. Maybe I’m wrong, I’ll give it another read and see, but it sounds like one bureaucrat passing the buck, and another trying to chalk up the decimation of the local animation community to one guy complaining. Am I reading it wrong?
Again, here’s the link back to the latest article.
Film N.S. head supports animators group beef
Province claims they haven’t changed tax credit system
By BRUCE ERSKINE Business Reporter
Fri, Sep 17

And CAR weighed in on it last week here, with a bit of updated info.
Another nice series of articles by the Toronto Star here,
which talks about the Digital Economy of Canada.

If you are still here in Nova Scotia, how can you help?

I wrote a letter to the editor at the Chronicle Herald and I URGE you all to do the same. If you are unclear about the nuts and bolts of the complex legislation, write about your fears of the loss of industry. Write about your friends, peers, and co-workers that you’ve lost to the studios out west. Write about the kids in college today learning the craft and having no chance to work in their chosen field in this province. Write about the choices you’ve had to make to hang on by your fingernails in the hope of pursuing your career here

Here is the direct link to the ‘letters section’ of the paper online:
http://thechronicleherald.ca/services/email-staff.php?id=Letters
And the e-mail address is (letters@herald.ca) but you need to include your full name, daytime phone number, and civic address.

Published in commentary and News